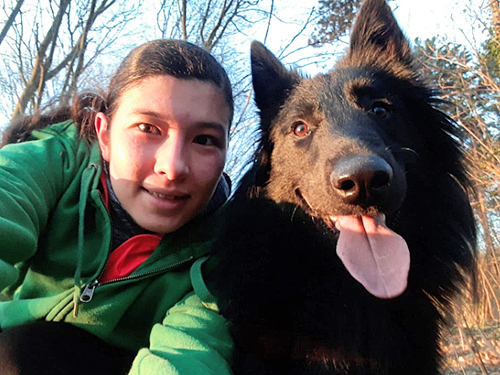 Nelly was born in the South-West countryside of France, very close to the Spanish border at the foot of the Pyrénées Mountains. From a very young age she enjoyed the company of animals, from dogs and cats to guinea pigs, chickens and horses, and even a donkey.

She pursued her studies in fine arts (Nantes, France), interior design (Paris, France) and architecture (Paris, France / Tokyo, Japan), which gave her the opportunity to travel to China as well as several times to Japan. As a professional architect working in Paris for a British based office, Nelly also had to frequently travel to London. Being married and a new mother to a little girl, Nelly and her husband are planning to move back to the countryside, in the South-West of France from which they both originate, to settle their family.

Nelly’s involvement in the Tamaskan breed has grown over the years and she has taken several online courses about Genetic Management, as well as French governmental courses to obtain official accreditation to become a licensed dog breeder in France. After several years of participation in the Tamaskan community and researching the different bloodlines, Nelly will soon start her own Tamaskan kennel in the near future.