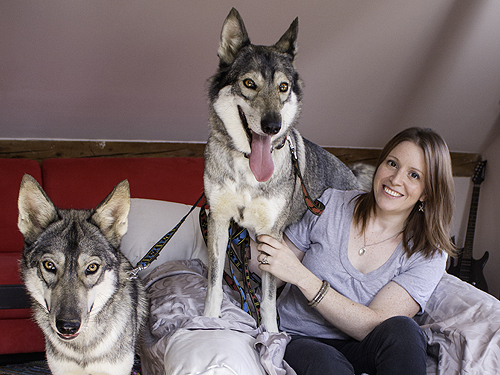 Debby is truly an international “citizen of the world” in every sense… she was born in the Netherlands, though she is British by nationality, and she was raised in North America (Calgary, Canada and New Orleans, Louisiana). As the eldest child of an expatriate family, she has lived all over the world, from Jersey (Channel Isles) to Texas, and she studied at Webster University in Leiden, Netherlands. She is now settled in Croatia (EU) and recently obtained Croatian citizenship. Debby has two children, Dylan and Darcy, from her first marriage, and she now lives with her fiancé, Erwin, at their family estate near Zagreb.

Debby’s interest in animal husbandry developed when she was very young… horse-riding from the age of 4 onward, and fostering all kinds of wildlife from a young age. By the age of 12 she was already selectively breeding gerbils and she was fascinated by the genetic inheritance of the various coat colors. This hobby eventually ‘spawned’ (pun intended) into a whole new direction: breeding show quality Betta splendens (halfmoons, crowntails, HMPK, etc). Her childhood dream was to become a veterinarian, so this is the direction towards which she focused her studies and she completed her internship at Sommet Vert Veterinary Surgery in Jersey, Channel Islands before deciding to embark on a different career path.

After her university studies, from which she obtained a BA in Media Communications with minors in English and Philosophy (as well as certification in International Human Rights and Humanities), she got her first Tamaskan puppy, Jasper, and soon fell in love with the Tamaskan breed. She subsequently founded and was the CEO of a successful, independent media consultancy company for several years, before deciding to focus her time and energy on the development of the Tamaskan breed. Aside from being a registered Tamaskan breeder and member of the ITR Committee of Breeders (COB), she regularly participates in many online courses pertaining to canine theriogenology and she is the creator of the International Tamaskan Forum. She is passionate about bloodlines, genetic diversity, and population management.