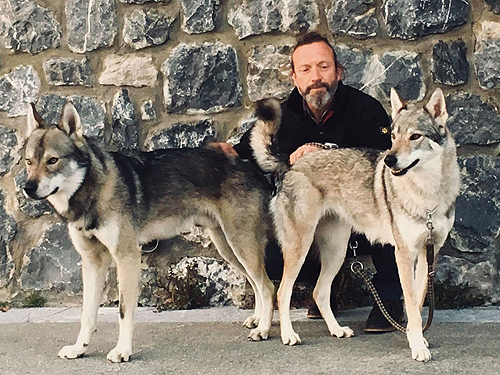 Christian lives in Belgium and has a science-based education. Although he originally worked in the entertainment industry, he now works in the transport industry. Sporting is his most important hobby, and that includes everything from long-distance running, water sports, winter sports, hiking, travel and, of course, all dog-related activities. He has had dogs all his life, mostly border collie type dogs, which he loved for their exuberance and sportiness. A few years ago, when his last border collie, named Rizzo, was growing old, he began looking for another dog to join in his sporting activities.

Christian originally came across wolfdogs but, after weighing up all the pros and cons of the different wolfdog breeds, he decided that a Tamaskan Dog would best suit his way of life. After searching the planned litters for 2 years, he came across his future “princess”, a female Tamaskan named Oonai, from the Netherlands. He has since expanded his family with another Tamaskan, a big baby boy named Tane-Nui, who came all the way from the south of France.

[Fluent in English, Dutch and French, with basic knowledge of German and Spanish.]