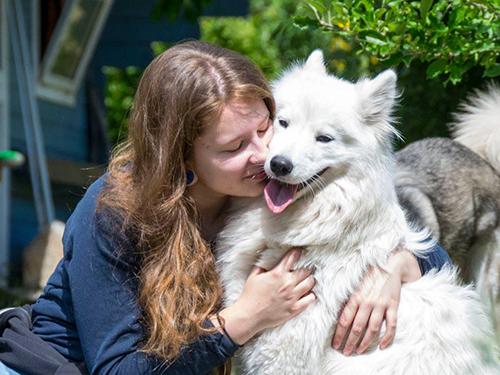 Barbara was born in Eisenstadt, Austria and she moved to Vienna to study Biology (specifically, Paleobiology) at the University of Vienna, which she completed with a Bachelor of Science. After that she started studying Wildlife Ecology at the University of Bodenkultur in Vienna, where she is currently enrolled in a Masters program.

Barbara currently lives with her fiancé, Fabrizio, and their two rescue cats, three dogs and various small vertebrates and invertebrates. After meeting her fiancé’s Alaskan Husky, Pinu´u, she became  interested in Nordic Dogs. After looking for over year she found a Samoyed breeder, from whom she got her first dog, Alice, in 2017. She started getting involved in the Tamaskan breed when she and Fabrizio, her finacé, got Skadi. Since 2018, she has been responsible for the correspondence of the Tamaskan Club Austria and, every two months, she publishes the Club newsletter regarding the breed.

Together with her fiancé, and all three of their dogs, Barbara regularly partakes in Hiking, Canicross, Bikejöring, and other sporty activities, as well as occasional photoshoots with their three dogs. She consistently strives to educate himself further about topics pertaining to dog breeding, breed preservation and structure/movement in dogs.

[Fluent in German and English.]